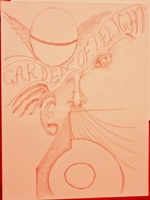 Dream and fantasy – darkness and hope – love and hate; how to explore all these deep contradictions inside us? While exploring the technical ideas for their Autumn production Garden of Delights,  Thespians Anonymous (TA) was faced with the technical difficulties and also the huge scope of the play. This forced them to be more creative and explore new ideas for how to stage the surreal journey of the main character, Lais’s self-discovery on stage. Their solution was a 3-faceted space full of mystery and emotions. Director Ritabrata Dutta in collaboration with Alegre Priscila and Velda Parkkinen created this 3 facets, ”Actors on stage”, ”Actors in shadow projection” and ”Actors in video projection” interacting with each other.

Video projection and shadow projection in theater dates back to early 20th century and the era of  traditional Chinese puppet theater correspondingly. Slide projection starting in the 1920s have been used in  theater extensively from then on. Fernando Arrabal also used this technology for Garden of Delights’  initial productions opening up the exploration space. In this production, TA creates a whole set of surreal  videos going far beyond the scope of this play using the symbolic ideas of birds in a cage, fishes in  a whirlpool, dreamy animations and contrasting images of a dark green patch of grass and a black mountain  of trash to highlight the bondage of our mind and contrasts in our life. Multiple forms of media potently  accompany Lais’ travels in time, taking her to the past and future while she gets to interact with the sharp  facts of her life.

Also, shadow projection creates a colorful, delirious world of Lais and her tormented past in the orphanage  through colorful and black and white imageries. Different feelings attempt to touch the corners of our mind  through the collage of lights, shadows and sudden changes of video moods. Shadows of actors behind the  screen interact with real actors on stage to give the sense of distance, superiority and pain. Love, death and colorful time travel get caught into the dreamy world of surreal fascination of Garden of Delights. Original musical scores by former Sibelius academy students Janne Ali-Vehmas and Mikko Kolehmainen creates the soundscape of this journey through shadows and videos – doesn’t it remind you of the colorful dreams, sepia nostalgias and black and white nightmares?

Ritabrata Dutta, originally from Kolkata, India, moved to Helsinki after living in USA for 4 years. He joined  Thespians Anonymous in Fall 2012, took part in the English theater festival FELT IF 2012 and is now the director of the autumn 2013 production Garden of Delights. Theater is one of his surrealistic fantasies outside of doing research in Mathematical Statistics and Machine Learning.

If you really want to feel the shadows by your ear, smell the videos by your heart and touch the soundscape by your eye, you have to come and experience the innovative multimedia experience of Garden of Delights, going to be staged from 28th November to 1st of December 2013 in Hurjaruuth by Thespians Anonymous.