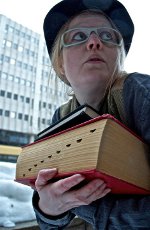 Parties, play readings, movie nights… and the board meeting. This is the way the inboxes of the Thespians Anonymous (TA) members tend to look like, especially in the early autumn. The number of emails and invitations can sometimes feel a bit overwhelming, even to a Thespians veteran. And, to be honest, maybe the board meeting doesn’t sound quite as much fun as the rest of it. But it is the place where you can have your voice heard.

You see, TA is kind of a democracy – each member gets one vote. But, like in every democracy, using your vote requires making room for the democratic actions in your calendar. At TA, these actions mainly take place at the board meetings. Even if they are commonly called “board meetings”, they are actually meetings for all Thespians. Basically the board means the people who prepare the meetings and take care of all kinds of practical issues between them. But decisions are mainly discussed and made at the meetings.

What kind of decisions are we talking about? Most of them are closely related to the lives of TA members. They can be about what kind of events will there be for you to attend to or about what rehearsal spaces and times will be used, which directly affects the schedules of the people participating in a production. Still, perhaps the biggest decision to be made is selecting or approving TA’s following theatrical extravaganza – something that affects all the TA members who want to take part in productions, as most of us do.

One thing to know about board meetings is that you shouldn’t get discouraged the first time you get there. At least when I attended my first board meeting, I felt confused. There were all these assertive-sounding people discussing things that were not really familiar to me. Still, I’d like to think my presence was useful – if not in that first meeting, then in the ones that were to follow. The more I sat in the meetings, the better I understood how TA works and, therefore, I had more ideas and suggestions to share. So, even if you feel a bit confused in your first board meeting, don’t give up. You’ll get the hang of it.

Now, you may think that all the people at the meetings – not to mention the board members themselves – are some kind of administrative geeks in love with excel sheets and post-its. Fear not. I can assure you, not counting an exception or two, most of us are there not because we love administration or board duties, but because we love TA. And somebody’s got to do it. So, even if you’re not that passionate about administration but do care for – or are willing to learn to care for – TA, worry not: that’s totally enough.

So, if you want to affect what happens in TA – and consequently to you as a member – the board meetings are the place where you can make the difference. If not? Well, then you’ll just have to live with the decisions other people will make for you.

(And if you’re not happy with how this works now, come to the meetings and voice your opinion. Let’s change things for the better together.)

Erna Bodström is serving the TA board for her second year. Having joined Thespians Anonymous in 2010, she served as the secretary and communications executive in year 2012 and is currently the chair of TA. She does secretly think post-its are kind of fun (oh, the pretty colours!) and, in addition to theatre, she loves chocolate, hugs and long walks.”