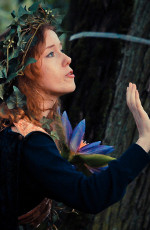 It’s usually quite difficult for me to pretend being anything that I’m not. I dare say I play myself better than anyone else on this planet, but in the world of theatre, that’s not quite enough.

During my acting history, I’ve played five different characters in five different plays.  Although the plays themselves haven’t been alike at all, there’s something that they all have in common: each character of mine is a more or less unpleasant person. I don’t think I’ve ever not rolled my eyes in character. It’s strange, because I don’t consider myself particularly loathsome. Still, I feel most at home playing jealous, bitter, or murderous characters with anger issues. Theatre is a beautiful thing, is it not?

When creating the character’s way of moving, it helps me a lot to figure out a one-word description of the character, like ”royal” or ”graceful” or ”tomboy” – thinking of the character in a nutshell, so to speak. It helps me get in the right mindset, which in turn makes me almost automatically move like I imagine the character would. I played Oberon, the fairy king from the Midsummer Night’s Dream, at Thespians Anonymous’ Shakespeare in the Park in 2012. For him, this word was ”obsessive”. He is set on getting his way even through a bit foul play, and everything needs to be meticulously perfect for his plan. So, naturally, when setbacks ensue, he explodes.

In acting, there is always this certain wall that makes me hold back a little, and so I don’t always know how to really throw myself in. I don’t have a loud voice or big movements in real life, so making those happen on stage is where I often struggle the most. I was determined to try, though: I didn’t want to appear less animated than my co-actors in this almost slapstick-y scene of a love quadrilateral. It was challenging at first, but I kept trying until I got my desired response and then tried to hold on to whatever I found through yelling, stamping my feet, and tearing my hair.

With Oberon, I think I managed to break the wall more than with my other roles, and in that sense, that is my proudest performance so far. I’ve even found myself wishing I had done some of the other roles after Oberon, so I could’ve reached an even better result. Of course, I can’t go back in time, so the best thing I can do now is to remember my fanatical fairy king and know that I’ve got it in me. Even if I sometimes have to look for it.

Siiri Turunen is a nice girl who becomes nasty on stage. She will be on a hiatus from Thespians Anonymous this year, but she’s eager to follow their shenanigans even from a distance.

This is the fifth entry in a series of blog posts entitled “My Approach to Acting”. In the series, members of Thespians Anonymous write about their individual approaches to acting and creating characters.