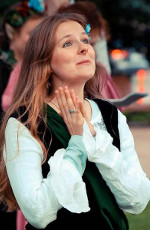 There is a first for everything, like launching this blog in 2012. During last year, you had a chance to read about first-time directing, acting, singing… In the opening blog post , I promised some new endeavours. Here we are, almost a year later and I am proud to say that yes – Thespians Anonymous Theatrical Society (TA) embarked upon some firsts too.

Ideas linger around until they spring to life. And talking about new endeavours: last year, we finally did Shakespeare in the Park  and not only that – we were also part of the Helsinki Night of the Arts programme and had up to 300 passers-by stop to watch.  Many of them enjoyed the performance so much, they stood on their feet for an hour. That is a big compliment.

The thought of joining forces again with other theatre companies also came around. The fourth FELT IF (Festival of English Language Theatre in Finland) was the biggest success of them all. And for a change, it was TA who produced most of the participating plays thanks to a big interest from within the group. Although participating in FELT IF wasn’t a first as such, it did have the biggest number of plays and directors/actors involved thus far, making it rather special.

What is also worth mentioning, an idea of staging a proper musical was up in the air for a while too. Again, it was last year when the ball went rolling and the production was decided on. TA chose I Love You, You’re Perfect, Now Change  – a musical comedy that is the second-longest running Off Broadway production.

Some of you may not know this, but TA works on production-based terms, beginning preparations only a few months before performances. This is the first time we will do a production of such scale and exceptionally, we gave ourselves almost a year to put the musical together. We even have a musical director and a little orchestra! Come to Gloria  in April to see it right here in Helsinki.

We at TA are full of energy, have many ideas and are ready for what 2013 has to bring. A lot of excitement, that is for sure. May your year be filled with joy, too.

This blog continues and will introduce new series My Approach to Acting.

Alicja Kocańda is passionate about the performing arts industry. Her term as Chair of TA is soon over – making this her third and last TA Executive Committee role. She absolutely loved witnessing TA evolve over the years and after being actively involved with their 11 productions – this theatre company will always hold a special place in her heart.