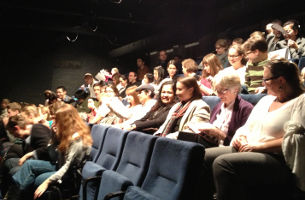 It is always nice to see people leave the theater with a smile on their faces. Pia and Niina, who teach at Haaga-Helia University of Applied Sciences in Porvoo, were two of those leaving the opening night of FELT IF 2012 like that.
– Variations on the Death of Trotsky was very funny and the actor really looked like Trotsky, started Pia describing her experience.
– I also liked the chemistry between the actors of Call of the Revolution. It reminded me the events of 9/11, then I had my first child, we were at home, and big things were happening outside. It evoked similar feelings.

Viola Karungi, from Uganda and currently on student exchange at the University of Helsinki, was ecstatic about NOT The Vagina Monologues.
– It was hilarious and very cleverly connected, had well crafted transitions, a good pace for a comedy and clearly well thought simple yet intricate plot at the same time, she commented.

On the second evening of FELT IF, I sat next to her during the world premiere of Bear With Me. As far as I could tell from her joy afterwards (and as far as her giggles gave away during the play), she also enjoyed it.
– The play spoke about things that almost every student goes through during their university life, and it felt so ‘real’ and that having the ‘superego’ as a an actor on stage was an extraordinarily ingenious choice by the playwright, she applauded.

Among the audience of the opening night were also Allen, an exchange student, who had heard about the festival through a university mailing list and brought along Liisa, a Helsinkian. So, how was FELT IF as an experience to them?

– I really liked the fact that within one evening there were similar yet very different plays, and despite the simple sets and single locations, they were kept very entertaining, summarized Liisa.

Allen added that even though the plays are in English, there is a “Finnish influence” to the acting, and was surprised to find out how diverse the cast in the plays was.
– I actually don’t see a lot of theater, I generally prefer movies, but I enjoyed them, I think I will be coming more often.

The festival will go on until 25 November Sunday, which means still tons of work for us, but it is fantastic to see the people we reach and entertain – and that makes it worth all the hard work. So come and be prepared to be dazzled by some of the finest pieces of English language theater in town!

Nihan Tanışer truly feels at home in a theater building, anywhere but on the stage. You won’t spot her during the festival unless you look at the lights board at the back of the audience, or else she might be changing sets in between plays in black clothing, or serving coffee during the intermissions.