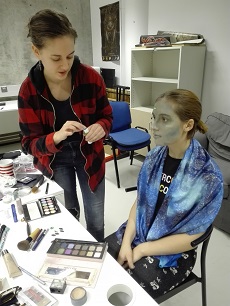 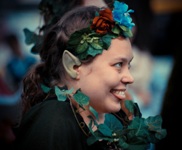 Designing makeup and hair for Alice in Wonderland has been quite a ride. At the beginning of the production, we had a meeting with the costume team, the director and the producer to go through each character, their characteristics and their dominant color. As the characters came together, the dominant 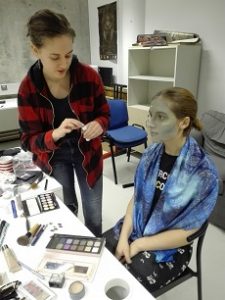 colors changed a little, but that was nevertheless the main idea: each character was to have a color that we would use in their costume and makeup. Once we had the colors, we got to designing, which was mostly trial and error at least on my part. Me and Veera Sahlberg, who plays the duchess, did the majority of the makeup design with directions and suggestions by the rest of the team. Basically, we got together one day, brought all our makeup, and asked each other: “What can we do with all 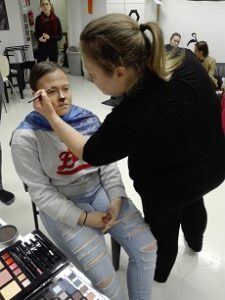 We tried various versions first on ourselves and then on our teammates as we figured out a preliminary design for each character. But of course, the makeup always looks a little different depending on the face on which it is, so we organized a day full of makeup, hair, and costumes to see how the whole shebang would look on the actors. The cast were real troopers, letting us poke 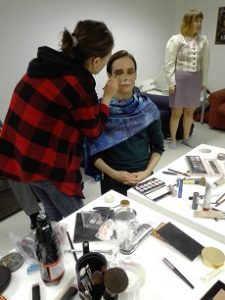 them with various appliances and glue gems on their faces (because what is Wonderland without a little sparkle?) with little objection.

There are quite a few creatures in Wonderland, and most of the humans aren’t that ordinary either, so it’s been really fun – and at times frustrating – trying to create their looks so that they are recognizable while still carrying that magic that Alice encounters when she steps into Wonderland. And I do believe that this magic is well portrayed – at least where the makeup team is concerned – 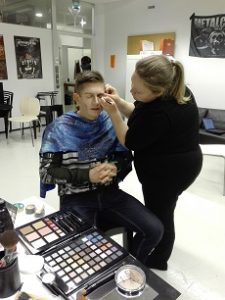 in the colors and the sparkle of each character. It is quite telling that when we’d ask our producer for an opinion on a makeup design, his comment would in most cases be: “Add some more glitter to it.” And really, who are we to argue? After all, there’s nothing a little glitter and a few gems can’t fix.

Saga Arola has been an member of Thespians Anonymous since 2010. She has acted in previous productions as well as directed. Saga will play the role of Cheshire Cat in Alice in Wonderland.