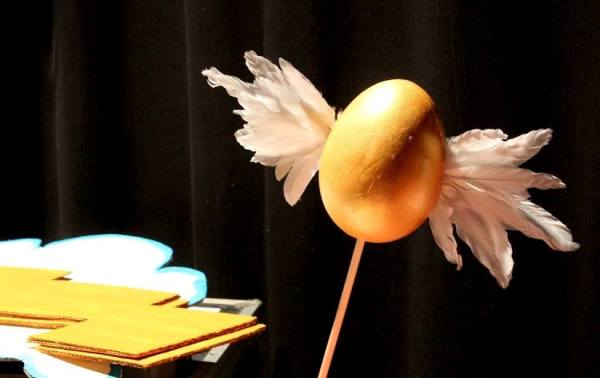 There was an excited atmosphere in the foyer in Gloria last night ahead of the premiere of Thespians Anonymous’ spring production ‘Iliad, Odyssey and all of Greek Mythology in 99 Minutes or Less’. Would the 10 actors cope with the challenge of portraying more than 100 characters in a single show? Would Helen ever be rescued, would Achilles ever engage in battle, and would the hippo during the creation of creatures be endowed with “two giant white teeth, but only at the bottom of the mouth”?

The answer to all these questions was a resounding yes. The performance was a comic tour de force that didn’t leave a single pun unused or the viewers cold. The members of the audience were particularly impressed with the skillful actors who were able to create a distinct personality for all their characters. “There were so many great characters in it that it’s hard to pick any favourites, but I especially enjoyed Poseidon, Zeus, Aphrodite, and man and woman”, Mari Orava says.

Achilles seemed to be another favourite. “Achilles was really funny!” exclaimed Sara and Anne Lankinen, who had not seen a Thespians Anonymous show before. A group of students from the Etu-Töölön lukio were likewise first timers in a Thespians’ show. “We’re here on an excursion with our English class. Although we knew some of the mythology beforehand, this is a chance to both learn more and practice our listening skills”, they explained.

Asli Keceli came to see the play after receiving an email about it from a friend, and brought Mehmet Ali Keceli with her. “We actually live in Finland, and feel bad we’ve missed your previous productions! The play is funny, and we liked how the mythological events, which we were familiar with beforehand, were portrayed in such an amusing and different way.” Mehmet’s previous theatre experiences have not been very positive, but this production has changed his mind when it comes to theatre: “Seeing ‘Iliad, Odyssey and all of Greek Mythology in 99 Minutes or Less’ made me think I should give theatre another chance – there are great plays out there too!” “We’ll definitely recommend that our friends go and see the remaining shows”, Asli added.

At the end of the show, the cast and crew were rewarded with an enthusiastic and well-deserved applause.

Thespians Anonymous are proud to present their spring production of 2014: The Iliad, The Odyssey, and All of Greek Mythology, in 99 Minutes or Less! If you missed the premiere, don’t worry – you still have a chance to see it next week on the 13th and 15th of May, also at 7 P.M., all at  Kulttuuriareena Gloria, Pieni Roobertinkatu 12. More info on our webpage or on our Facebook event page