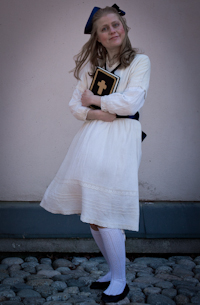 And-now-for-something-completely-different could have been the catchphrase of Thespians Anonymous (TA) in 2013. It was the year of love, and it was the year of darkness. Yet we must also look forward. What could be TA’s catch phrase for 2014? Perhaps: back to the roots.

Year 2013 started with singing as the first TA musical ever, I Love You, You’re Perfect, Now Change, premiered in April. Although it was a musical and therefore different from what TA had previously done, it was very much what TA is all about – funny, comical and light, and dearly loved by both the cast and crew and the audience. Approximately 600 audience members saw the musical during its five performances – some people even came twice. Love was clearly in the air.

In summer it was time for the TA’s first rehearsed play reading* ever. The Pride was something darker and edgier. The performance was a part of the Helsinki Pride week in June, and as such it was also a contribution by TA towards sexual equality. So I’d say it was clearly pro-love as well. The evening was hot and sun was shining outside, but that didn’t stop the audience from coming in and enjoying the show. The theatre was totally packed, so the programmes got an alternative use as fans.

Come autumn, the weather turned dark and cloudy, and so did the love-filled atmosphere of TA. Thus the autumn marked yet something completely different, as TA took on the challenge of surrealist theatre, another first for the group. Although Garden of Delights was darker, it was no less ambitious, as it combined anguish and anxiety to beautiful visuals created by lights, videos and shadows. Freaky circus, said one of the cast members, and it was quite to the point.

So, love and darkness were the themes of TA productions in 2013. But there was a lot more going on, like a one-off Shakespeare performance and lots of parties, play readings and movie nights. So what did the year look like in numbers?
– 1 musical, 1 play, 1 rehearsed play reading, and some scenes of Shakespeare
– 11 performances altogether
– 64 events organised (excl. rehearsals)
– 38 active TA members
– 950 audience members
– 24 blog posts seen by 14, 795 visitors

Erna Bodström is chair of Thespians Anonymous (LINK: http://www.thespiansanonymous.org/) in 2013 and still a little bit longer.

* A rehearsed play reading is a performance, which includes some rehearsal but not as much as a full production would. The actors are not expected to learn all their lines but have scripts with them on stage.