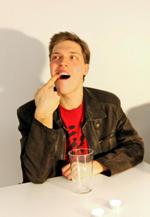 In most theaters, sometimes the actors will have to play multiple roles in a production, but five roles in one evening is already quite a feat. This is what happens in Thespians Anonymous’ spring musical I Love You, You’re Perfect, Now Change. It is an exceptional piece in many ways. One of those ways is the fact that it has no central plot.  All the scenes are more or less separated from each other and are connected only by the main theme of the musical, which is love in its many stages. In plain terms this means that pretty much all the actors will play more than one character during the piece.
I myself have five different roles to play in the musical. From the young, single guy to the middle-aged married one, there’s a lot of variety there and a lot of different emotions to play. For me, however, it’s not as big of a challenge as you might think.

Playing multiple characters is, in the end, more about imagination than anything else. To slip into one character’s boots in one scene and then into another’s in the next is nothing more than a mindset (and a clothes set) change. Now, to be fair, I tend to have a hyperactive imagination, and so jumping into different roles for me is almost like a second nature – I do it even when I’m joking with my friends.

Also, a change of clothes and of make-up helps the transformation enormously. Especially when the feel of the clothes is very different from the ones you used previously, you immediately hold your body in a different posture. A suit worn by a guy on his way to the altar feels drastically different from the loose home clothes of a working-class dad, so you need to accommodate that with your poise and gait, thus helping you differentiate the previous character from the new one. To make things more believable, if there is a large age difference between characters, try to emulate that by making yourself slightly more flexible when young, and slightly more stiff when older. Also, practicing how to make faces is paramount to acting, no matter how many roles you play. Faces help to make different characters stand out with their unique facial expressions – that guy does a lot of frowning, this guy has a very smug smile…and so on.

The hardest part for me, however, is how to make the characters seem distinct from each other, and not seem like they are just me, the actor, happening to be in more than one scene. The scenes are very short and there’s not a lot of time for ‘character development’, which means that the characters need to be different in a way that the audience can understand immediately. This is where all the things listed above come into play.

I try to have a different approach for every character and make each one as individual as possible. Sometimes, when I need to really get into the feel of a character, I will actually outline his personal history in my head. I might list things like his temperament, his family history, his ambitions or even his job. So far I haven’t felt the need to make them specific enough to know what they eat for breakfast, but I suppose it’s never a bad thing to know your character too well!

Jonathan O’Brien is an avid thespian and a loose cannonball with little idea as to what happens next. His dream job is to be a voice actor for computer games so that he can get paid for shouting obscenities into a microphone all day.

Thespians Anonymous proudly present the comedic musical I Love You, You’re Perfect, Now Change on 12, 14, 15, 21 and 22 April 2013 at Gloria Kulttuuriarena in Helsinki. For more information see Thespians Anonymous website or the Facebook event of the show.