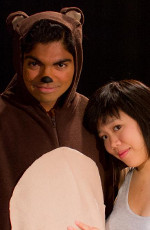 “Don’t be afraid to overdo it, then it’s easy to tune it down”, this was the first and possibly the best advice I heard from my director in the very first play I got casted.

I have always been interested in acting, but I never gave it a go. I confess I was apprehensive about stepping on stage. It can get very comforting to sit in the company of an audience, but I was determined to change this. As I geared up to audition, I scanned through the different roles and decided to pick a character to whom I could relate the most.  Yes, I know it sounds ironic considering that as an actor, one should be able to take on diverse roles.  However at this level, it was important for me to feel comfortable on stage.

For someone who is new to the Acting Biz, the obvious way to learn was to be very observant of my fellow actors at Thespians Anonymous. My role was a fictional character Bear (cute, sarcastic, quick-witted guy) who is basically the super-ego of a young teenage girl. The most important lesson I realized is don’t hold back anything, give it 100% in terms of energy, enthusiasm and voice projection (considering that throughout the play, we cover a spectrum of emotions).

We all can easily establish that people are different. What may appeal to some may not be wonderful to others. Few may find humour in certain lines. We performed for 4 shows. In each show, the audience reacted differently to the same set of lines. It may have thrown me a little off balance by these unexpected reactions/laughs. This was another gentle reminder that the aim is not to act for the laughs (even though my character was sort-of the comic relief) but to project the character using my interpretation.

I have this really annoying habit (or a seemingly innocent urge) to cut people off before they finish their lines. I did this at the audition too (at the very first line itself). This really stressed the importance of listening ACTIVELY to what’s going on stage despite knowing the outcome.

Acting is all about telling a story, one needs to vary their tones and engage the audience. One of my fellow actors emphasised on how important it was to rehearse the lines slowly because “if you rehearse the lines fast, you can bet that you’ll be speaking way much faster on stage and that’s not what we want now, do we?”.

Siddhesh Krishnan has recently discovered that his right side of the brain is starting to develop in his quest to be more artistic and creative in his thoughts. He believes that we all are gifted artistically. He dreams of being a guest on a talk show to share his transitional journey on how he quit coffee.

This is the first entry in a series of blog posts entitled “My Approach to Acting”. In the series, members of Thespians Anonymous write about their individual approaches to acting and creating characters.

Our thanks to the photographer, Håkan Mitts!