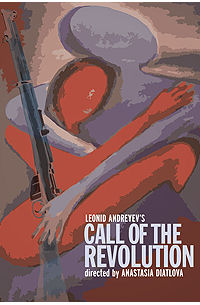 Women wearing striped prison robes cry “All hail Comrade Beria! Hurrah!” as the iron prison bars close with a loud clang cutting off the stage from the audience. This is the end of Journey into the Whirlwind, a play recounting the soul-crushing horror of political repressions that took place in Soviet Union in the 1930s.

Theater and politics may seem like strange bedfellows, but they are more closely intertwined than you think. From the first days of its existence theater has been used to examine the social and political issues of the day whether it was the clash of the individual with totalitarianism in Sophocles’s Antigone or the anti-war sentiment of Euripides’s The Trojan Women.

While theater has often been used to serve the propagandistic needs of the ruling power, it has always had unlimited potential for social commentary and political subversion. Unlike most other forms of art, theater is very difficult to regulate. No matter how much one censors and edits the script, there is no way to prevent actors from delivering unscripted lines once they are on stage. And while reading is usually a solitary occupation, a precondition for theater is a public performance with a large crowd of willing and attentive listeners.

Folk theater is the precursor of the subversive political performance art of today. As unregulated traveling troupes took their unscripted plays all around Europe, they participated in some of the first acts of social protest. Mr Punch and Judy, the irreverent and rowdy British puppets, were the proto-anarchists, while commedia dell’arte gleefully showed the rich and the powerful outwitted by cunning servants and vagabonds.

This proud tradition was carried to modern audience by the works of Bertolt Brecht and Arthur Miller. Issues of class, race, gender, war, poverty and social inequality have been explored by contemporary political theater. It has great power as a political tool because it quite literally gives voice to the oppressed to speak out against an oppressor.

In 1907, only two years after the first Russian Revolution, Leonid Andreyev wrote a short story entitled From a Story that Will Never End about a family who wake up to the sounds of barricades being built under their window. The short story was adapted into a play, Call of the Revolution, that despite being hundred years old has lost none of its poignancy. You do not need to look far to see that the current political climate all over the world is rife with revolts, protests and revolutions.

Recently, in a strange twist of historical irony, the drama surrounding Pussy Riot’s punk performance in a cathedral has spilled from courtrooms into theaters, producing not one, not two, but three new plays in both Russia and Europe. Court transcripts turned into scripts, audience joined actors on stage, as the civil society searched for new ways to make sense of its political context. Mr Punch may have hung up his stick and retired to the realm of our collective folk memory, but his proud tradition of defiant performance lives on helping a new generation of actors, directors and writers challenge the status quo and maybe change the world for the better.

Nastia Diatlova is a staunch believer in social justice, equality and the subversive power of theater. She is directing Leonid Andreyev’s Call of the Revolution (adapted by Walter Wykes) for FELT IF 2012.