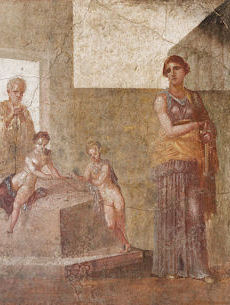 “Before we begin I’ll fill you in with a few details about the Greek culture. Like the fact that back then women were considered to be interested in mainly three things: sex, gossip and alcohol”, Nastia Diatlova, the organizer of our play reading states. So, there go the ideas of reciting over 2000 year old verses with growing anguish! I’m accustomed with Greek mythology but Greek plays, I really haven’t got a clue of what to expect… Drunkenness, orgies and tattle tales weren’t high on my list of expectations to be honest. But Medea, from as far as 431 A.D., is pushing hard against time and cultural differences.

Nastia clears the plot before we begin with the prelude. Medea is an immigrant in Athens, being forced to a divorce with his husband who seeks a younger bride, forgetting Medea and their two children. Erna, one of the Thespians, starts as reading Medea’s part out loud. The roles are switched after every scene. In the end, everyone in our group wants to be Medea, and gets to be Medea.

“But if the marriage doesn’t work, then death
is much to be preferred. When the man tires
of the company he keeps at home, he leaves,
seeking relief for his distress elsewhere,
outside the home. He gets his satisfaction
with some male friend or someone his own age.
We women have to look at just one man.
Men tell us we live safe and secure at home,
while they must go to battle with their spears.
How stupid they are! I’d rather stand there
three times in battle holding up my shield
than give birth once.”

Sounds like a drama of today actually. Which of these little details of everyday life and feelings have disappeared from our world? Ok, I guess the use of spears and shields in warfare is to be excluded.

As the scenes go by, the fights between the soon to be unmarried couple grow more bitter and are filled with questions of love, power, sex and jealousy. During my turn as Medea I’m beginning to think that we must have gone through some kind of an apocalypse during the Middle ages to make this wonderful, open minded and societal theatre culture disappear (and for the concept of women to change so drastically!). And I’m falling completely in love with the idea of a man (one of the greatest trategians in Athens, Euripides, to be exact) who, over two thousand years ago, decided to describe the feelings of a divorcing immigrant woman in a play. At the end I’m absolutely hooked to play reading, listening to different kinds of interpretations of the roles, hearing men and women playing Medea and giving it all they feel.

The scenes go by and the play comes to its surprising and dramatic end… which will not be revealed here – read it, its worth it. Or even better, read it out loud with friends.

The next open play reading of Thespians Anonymous next will be held on Friday 22 February at 18:00. The play in question is Penelopiad by Margaret Atwood, which continues in the footsteps of Medea. It comtemporises the classic story of Odysseus, telling the tale from the perspective of Penelope, wife of Odysseys. Although the play is modern, it is written in the spirit of ancient Greek masterpieces. The play reading is open for everyone. For more information, see the Thespians Anonymous event calendar.