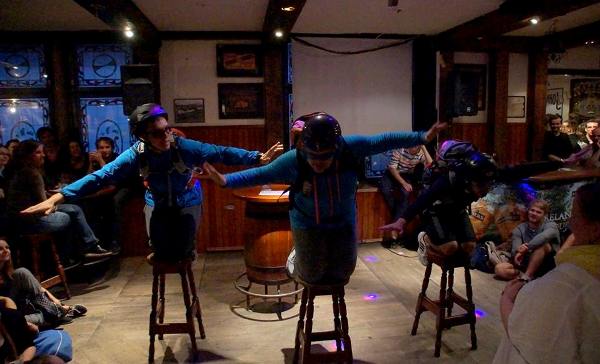 Thespians Anonymous performed once before on the Night of the Arts two years ago, with our own “Shakespeare in the Park”, which was a collection of scenes from different plays by Shakespeare played out in Ruttopuisto. On this day any place in the whole city can become a stage, people are interested in seeing free performances and they look for them (as opposed to us trying to promote our plays), it is quite easy to reach to an audience because all happenings in the city are presented on one map on the festival website. From the artistic point of view, performing to a non-paying public audience in a place that’s not a stage (in our case, a pub) is quite a different experience, as confessed by the actors too. There are other elements that can distract the viewers, they are not necessarily watching in silence, but getting drinks, coming in and going out; the distance between the actor and the viewer is sometimes disturbingly small and the perceived limits of the stage is almost non-existent. It takes the actors a bit more to grasp the audience, since they are all around them, but also they are closer to the reaction they get, the contact feels more informal and intimate too.

“Pint-sized Plays” were all 5-10 minute plays written to be played in pubs or bars by a cast of 2-3 people each with little very little set or prop requirement. This concept obviously pushes the playwright to be creative within certain limits, and the plays are more dialogue-centered. When I came across these plays, I was immediately intrigued – they were simple, fun, they sounded like they could be a perfect summer engagement. I wanted the production to be something to involve people right from the selection of the plays and we kept the audition process quite flexible as well, it was more about finding something for everyone who wanted to be in it in line with their preferences rather than a competitive casting process, this in turn allowed us to give chances to some fresh talent. In addition to all these, this was the only production I have done so far which was small enough that it did not require a separate producer, which meant I ended up overlooking the whole event from getting the licence, arranging venues, scheduling and promoting.

From the first reading until the performance it took us a little over two months to prepare it, and I will be attested that it was quite a joy, as well as great learning for me as a director too. It was great to see that amazing turn out in both the performances, and the applause is always worth the world!

Nihan Taniser had her third endeavour as a director with Thespians Anonymous (TA) with Pint-sized Plays. She is also the chairperson of the current executive board of TA. She is genuinely hoping to graduate from her master’s studies this year among all this theater goings-on.