A few days ago I finally brought myself to clean and sort all the papers and stationary that has been piled up in and around my desk for the past few months, which included scripts, notes, a few flyers I forgot to give away, post-its of to-do lists – some remainders of the now wrapped-up spring production, and some clues for what may be next. Before we know it half of the year is already gone, and although temperatures don’t agree and cooperate yet, summer is here, so it’s finally time to relax a bit .

Looking back at the spring, I can easily say that we had one of the most satisfying productions since I have joined Thespians Anonymous. All four shows of Iliad, Odyssey and All of Greek Mythology in 99 Minutes or Less left the house filled with laughter and enthusiastic applause; a well-earned reaction from the audience, for it took us 3,5 months of hard work to perfect it. Most importantly, we genuinely enjoyed ourselves while making this super-fast comedy. A new energetic director was thrown to the wild waters of amateur drama, we welcomed some new actors who did bang up jobs with their roles, we had many workshops in addition to the rehearsals, got high with the smell of the glue and paint, and meanwhile unfortunately broke many swords. Jolly good times. Massive thanks to all those who came to witness the fun!

So, “what’s next?” I hear you asking. Sadly (but only a little bit!) Thespians Anonymous have decided to take a short break from their regular autumn productions this year in order to work on improving their skills without the pressures of a full production and come back with an exciting play for spring 2015. Meanwhile we will be reading new plays and continue our other social activities like theme parties, theatre trips and movie nights, so no auditions in autumn does not mean you cannot join us yet; we always welcome new theater enthusiasts. Just email us and say hi (and hopefully more!).

At the same time, I am proud to announce that this break will only start after we bring you a new little production: Our next gig, Pint-sized Plays, will be made up of five short plays, all written as a part of a writing competition to be played in pubs or bars. Six actors will be acting out these 5-10 minute-long plays as a part of Helsinki’s own Night of the Arts on 21 August 2014 Thursday.

For now, in short: “Pint-sized Plays”, in less than two months, coming to a pub near you! Stay tuned! 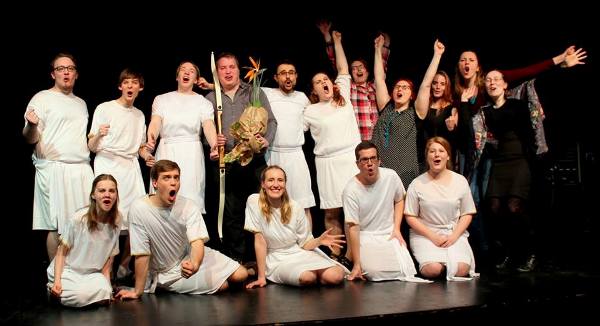 —————
Nihan Taniser is the current chairperson of Thespians Anonymous. She will be directing Pint-sized Plays this July-August in most of her time outside her day job as an IT consultant but she hopes to catch 1-2 days of summer too, maybe, please.