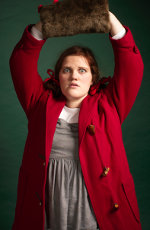 “Words, words, words” is what Hamlet said, but if you’re part of the Thespians Anonymous board, the word you’ll be repeating is decisions, decisions, decisions. Important questions are asked and more important decisions are made when we try and figure out what play we should do this spring, which venue we should use for it and whether or not we have enough money. And if we have too much or too little, what are we going to spend it on?

Being on the board is no picnic, although sometimes we bring fruits and cookies to share. Booking venues, taking care of financial matters, organizing parties, applying for grants and recruiting members while simultaneously having a full time job or studying at the university is a task that requires superpowers or at least 8 arms. I joined the Thespians Anonymous (TA) board the same year I joined the group and I stayed on for 3 years, mostly doing secretary work and keeping the membership registry updated as well as organizing parties and events. You might be wondering why I would volunteer to put so much time and effort into something that doesn’t pay me a salary, but the answer is that it gave me so much more. I got involved not just because I wanted to hang out with people and have fun but because I was genuinely interested and I wanted to participate and help out. This was the first time that I actually cared enough to put extra hours in for something because it felt important and I felt like I was contributing, even if it was “just” a group of people who did theatre as a hobby.

So, if the board gave me so much, why did I step down and not continue? Well, at some point, the rest of your life gets in the way and juggling all the responsibility was too overwhelming while simultaneously studying for my master’s, so I decided to take a break. But old habits die hard: I find myself thinking of new projects we could do, of suggestions I have and ideas I’d like to talk about. I’d like for TA to organize a trip either to another city in Finland to see a play or to go to the opera or the National Theatre live-shows at the Maxim movie theatre. And perhaps we could look into joining the Teatris theatre festival next year? Because once you’ve been bitten by the theatre bug and you get involved with the people, it’s hard to let go and even more difficult to get it out of your head.
TA needs a board for it all to function, but more importantly, it needs people who care and who feel like they can give something to the group as a whole. Therefore, I urge all new members to do as much as they can because every little bit helps and I take my hat off to those on the current board and to those who have been involved in the past. The ship needs a captain for it to sail but the crew holds the thing together. Welcome aboard, mate!

Lotta Heikkinen is still experiencing withdrawal symptoms after her 3-year period on the Thespians Anonymous board but, like all addictions, she can’t stop thinking about it either. She’s currently putting her experiences to good use during her internship this summer: they didn’t lie when they said these skills would come in handy some day.