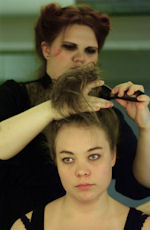 Symptoms: Butterflies in the stomach (or worse, an upset stomach), nausea, headache, racing heartbeat and a need to pee every 10 seconds.

Cure: Deep breaths, some stretching and a silent cry as you enter the stage.

It happens every time, no matter how well prepared I am: I get nervous. Before every show I suffer through most of the symptoms listed above while simultaneously trying to locate the mascara, fix someone’s button, curl another person’s hair and check that they have their props. In that moment, when I feel like my heart is going to jump out of my ribcage and splash against the opposite wall, the best thing for me to do is to help others with their make-up, hair, costumes and props. This way, I can concentrate on them and forget about myself for a while, which is exactly what I want and need.

Although you become closely acquainted with these feelings and symptoms, you have to grow used to them in order for you to cope with your illness. For Bushes & Briars, the first play I was in, I was feeling really sick and before I went on stage I was convinced that I would throw up. I had a bag as a prop, a really nice bag in fact, and as I prepared to go on stage, I decided that if I needed to barf I would do so in the bag and then continue as if nothing had happened. Luckily, the story ended well: the bag was spared and the minute I was out in front of the audience, I completely forgot about being nervous.

But even though you know your lines, you have your costume, all the props are in place and everything is as it should be, there’s always room for surprises. And that’s when your true skills as an actor come in. I’ve had my share of the unexpected; a light bulb once exploded above the audience in the first row while I was on stage, and although I heard the noise and saw the flash I didn’t even flinch – I just ignored it and kept on going. In Snow Queen, my partner was supposed to hand me a bunch of herbs that I in turn was supposed to hand to another person, only I didn’t have anything to give since he had forgotten them backstage. In those cases, there’s nothing you can do: you just go with it and pretend that you are holding something in your hand even though there’s nothing there but air. If a person forgets a line or a prop you can’t push the pause button, you have to continue and look as if you intended to do it this way all the time.  The most recent incident was in spring 2012 during Chemical Imbalance when the actors noticed – in the middle of the scene – that a piece of furniture was missing. How did they save the situation? They improvised; and no one suspected a thing.

So no matter how many times you rehearse a scene, no matter how well you’ve prepared and no matter how many painkillers you’ve taken, there’s always the possibility that your partner will forget a line, you’ll miss your cue, there will be no music (or worse, it will start playing at the wrong time) or that your props have been forgotten backstage. In those cases, I follow the advice of author Jacob M. Braude:  always behave like a duck – keep calm and unruffled on the surface but paddle like the devil underneath.

Lotta Heikkinen was diagnosed shortly after she joined Thespians Anonymous in 2009 and has since been classified as terminally ill. She hopes to spend the rest of her remaining days eating coconuts on a deserted island with David Tennant by her side but she’ll also settle for ice cream with Josh Groban (call me!)