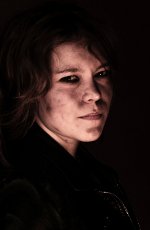 Actor Peter Facinelli has said that, in real life, pretending to be other people is considered a personality disorder, but if you get paid to do it, it’s called acting. Well, I don’t get paid, so I must have a personality disorder. Either way, what truly fascinates me in acting is the idea of pretending to be someone else; that one body and one mind is able to create, portray, and be multiple persons while still keeping track of who you really are underneath it all.

Those who know me now might not believe this, but when I was little, I was extremely shy. I don’t remember how I ever found the courage to join a theatre group at the age of 11 or so, but I did. However, I was in the group for only two years since by that time the other girls seemed more interested in fighting each other for the roles instead of cooperating and having fun doing theatre. Even though after leaving the group I didn’t pick up theatre as a “serious” hobby until university, I believe it was this first theatre group that initiated my love for theatre and my curiosity for the possibility of being someone else.

Even today I’m afraid of speaking in front of big crowds. Doing a presentation in front of a class is terrifying, and even talking in front of a bigger group of friends can make me mess up my words and forget what I was saying. I guess it seems odd, then, that I do theatre. The thing is, although I’m undoubtedly nervous on stage, it’s not really me. It’s a character that uses my voice and my body to manifest itself. Whatever happens on stage can be attributed to the character. True, it is the actor who portrays the character, but for some reason trying to be someone else just makes standing in front of a group of people so much more bearable.

So I guess acting is, in a way, also escapism for me, just like reading books or watching films. I get to switch realities and be whatever I want; I can get on stage and pretend to be brave enough to stand there. At the same time I get to forget myself and any worries I might have, never mind if those worries are replaced by the worries of the character. And even if I’m not on stage myself, being part of a group that’s putting on a performance requires everyone to be present in the moment. There’s no time to worry about other stuff.

Yes, doing theatre is stressful and exhausting. Yes, there’s always a moment in every production when I think I should find a new hobby. But it’s worth it. I believe psychiatrists generally suggest medication and counselling for personality disorders, but to me this one’s a keeper.

Saga Arola is a crazy thespian who has been a member of Thespians Anonymous since autumn 2010. She loves hugs, useless knowledge, panda bears, and having a good laugh. In her opinion, life is too important to be taken seriously and too short to be enjoyed later.

This entry is the third in a series of blog posts entitled “Why do I do Theatre?”. In the series, members of Thespians Anonymous write about the reasons behind them keeping up with a hobby that requires so much time and effort as theatre does.