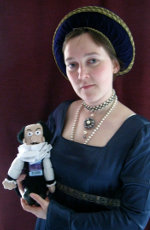 I’ve always loved Shakespeare. And doing one of his plays with Thespians Anonymous seemed quite natural, seeing as we are an English language theater group and all.

But the Bard is not the easiest playwright to bring to the stage. His language is difficult, staging is often challenging and the plays are invariably long. So doing individual scenes from the best-known and most-beloved plays seemed like an excellent opportunity to try our hand at Shakespeare without committing to the stress of a full-length production.

Night of the Arts, an annual Helsinki event that brings together performers, artists and musicians for a day and night of culture, seemed like the perfect venue. So the Thespians version of the idea of Shakespeare in the Park was born.

But how do you choose the scenes? Shakespeare left a legacy of over 30 known plays and all of them have their own merits. Even if you weed out the lesser-known works, you’re still left with a good dozen of excellent plays. I tried to choose the plays I felt would resonate well with the audience (familiar plays and familiar scenes) and be fun to do for the actors.

I was left with six well-know plays that offered a rich variety of comedy, drama and pseudo-history. To make a cohesive whole out of the scenes I will write little prologues to string them together into a narrative.

While the show will hopefully be of interest to the Night of the Arts patrons, what I really want to achieve with this performance is to introduce Thespians to a theatrical experience very much unlike our contemporary one. Shakespeare in the Park will be as close as we, a group of modern actors, can get to Elizabethan theater. It’s got many of the essential elements: the show is outside; we rely on natural lighting; the audience is often inattentive and sometimes unruly; minimum props and sets; and the costumes are a mishmash of anachronistic styles.

We often rely on modern techniques and conventions to present plays that were written long before these conventions were even thought of. This is a chance for us to explore different acting and staging styles and discover a theatrical heritage that spans several centuries.

Shakespeare in the Park will be our very own time machine that will take us to a place where the language, the characters and the aesthetic are so different that they would seem almost alien. Yet the stories that we will show remain timeless and as poignant today as they were four hundred years ago.

Nastia Diatlova has been an ardent admirer of the Bard all her life. She is the brain behind the project, code name Shakespeare in the Park. She hopes it’ll give Thespians the confidence to do Shakespeare and expects to spend the summer speaking in iambic pentameter.

Thespians Anonymous proudly present Shakespeare in the Park at the Night of the Arts, 23 August 2012 in Helsinki, Finland. Experience a collection of the best scenes from some of the most beloved Shakespearean plays such as Romeo and Juliet, Midsummer Night’s Dream and Taming of the Shrew in their original language.